To me, a metapattern is a pattern so wide-flung that it appears throughout the spectrum of reality: in clouds, rivers, and planets; in cells, organisms, and ecosystems; in art, architecture, and politics…
Tyler Volk

The most revolutionary time I ever had intellectually was in 1974 sitting with Maharishi Mahesh Yogi for one week of what he called “Vedic Studies.”  He was going to explain consciousness from a non-dual perspective.  In the front row he had a bunch of PhDs: physicist, chemist, biologist, mathematician and an artist.  He told them, “Now stop me when you think of something.”   The experts did stop him when they thought of a parallel between Maharish’s explanation of consciousness and some branch of science.  Day after day they did that, until my mind began to freak: “Why!”

Why were there so many parallels between consciousness and what I thought of as “Laws of Nature”?

I finally hypothesized that it was because all of Creation was based upon Pure Consciousness (consciousness as Absolute -not the consciousness generated by the brain) - and what we saw as Creation were actually, inevitably, “Patterns of Consciousness.”   I viewed this as a working hypothesis as my mind just couldn’t really swallow it.  Trained in biology and chemistry I was a materialist.  Or, to paraphrase my niece a generation later, “I don’t see how any college graduate can believe in God.”  And while perhaps I’d have said I did believe in God, that didn’t necessarily translate into all Creation being created in His image.
However, I made a hypothesis and have been collecting examples, bits of data, ever since.
So, now it’s 2014 – forty years of watching – and I have just discovered the work of Tyler Volk.  Since 1995 he’s written about Metapatterns.  I think this is the science supporting what I called patterns of consciousness.  What precipitated this discovery of Volk’s work?   I am trying to understand Geomancy as practiced by Marko Pogacnik.  And in my poking around this week I came across a rather surprising pattern.  These correlations are always so surprising to me and always seem to evoke a sense of wonder and why!

To begin:  I was looking are Plant Hardiness Zone maps – those maps that tell you what plants can be planted where.  I was interested in what healing plants grow where.  Somehow in my Googling I came across a map that displayed the differences in the 1990 USDA hardiness zones and the 2006 arborday.org hardiness zones.  This map shows wheretemperature changes are occurring across the United States.  This is one way of visualizing the evolving global climate. 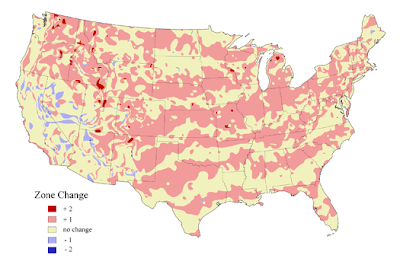 What surprised me was how this map of the U.S. reminded me of the pattern seen in developing embryos.A classic image in biology is that master gene expression establishing developmental gradients.  Below is a fruit fly embryo revealing the distribution of maternal proteins in anterior/posterior axis. The A/P axis is set up by a protein called BICOID that is expressed in an anterior-to-posterior gradient. 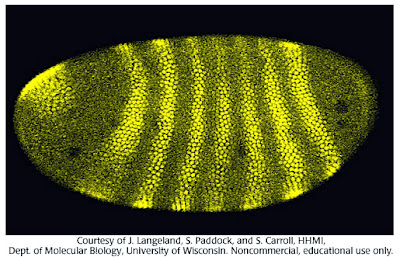 When I was in college a favorite phrase among biology students was, “Phylogeny recapitulates ontogeny.”  That was just the smart way of saying it looks like evolution of the species follows the same pattern as developing embyro.  Here that pattern seems to extend to global climate… Why?  Just chance?
I define metapatterns by saying where they are found and how I use them.
But what are they? And are they out there (patterns sensed) or in here (patterns imagined)?
Tyler Volk

AH!  Here is the inside/outside question of consciousness!
It all depends upon ones point of view regarding Consciousness.  Is it Egoic or Wholistic?  You’re your definition of consciousness state that it arises from the complex organization of the brain?  Or, does Pure Consciousness express itself as a Creative Intelligence (CI) arising from the VOID?
Egoic separation says the patterns lie outside and are observed.
Wholistic vision realizes that CI repeats itself throughout layers of complexity and scales of size: physics, chemistry, biology, ecology, sociology, geology, astrophysics.


Experience seems to suggest to me that both viewpoints are valid.
Posted by Pat Bralley at 9:53 AM