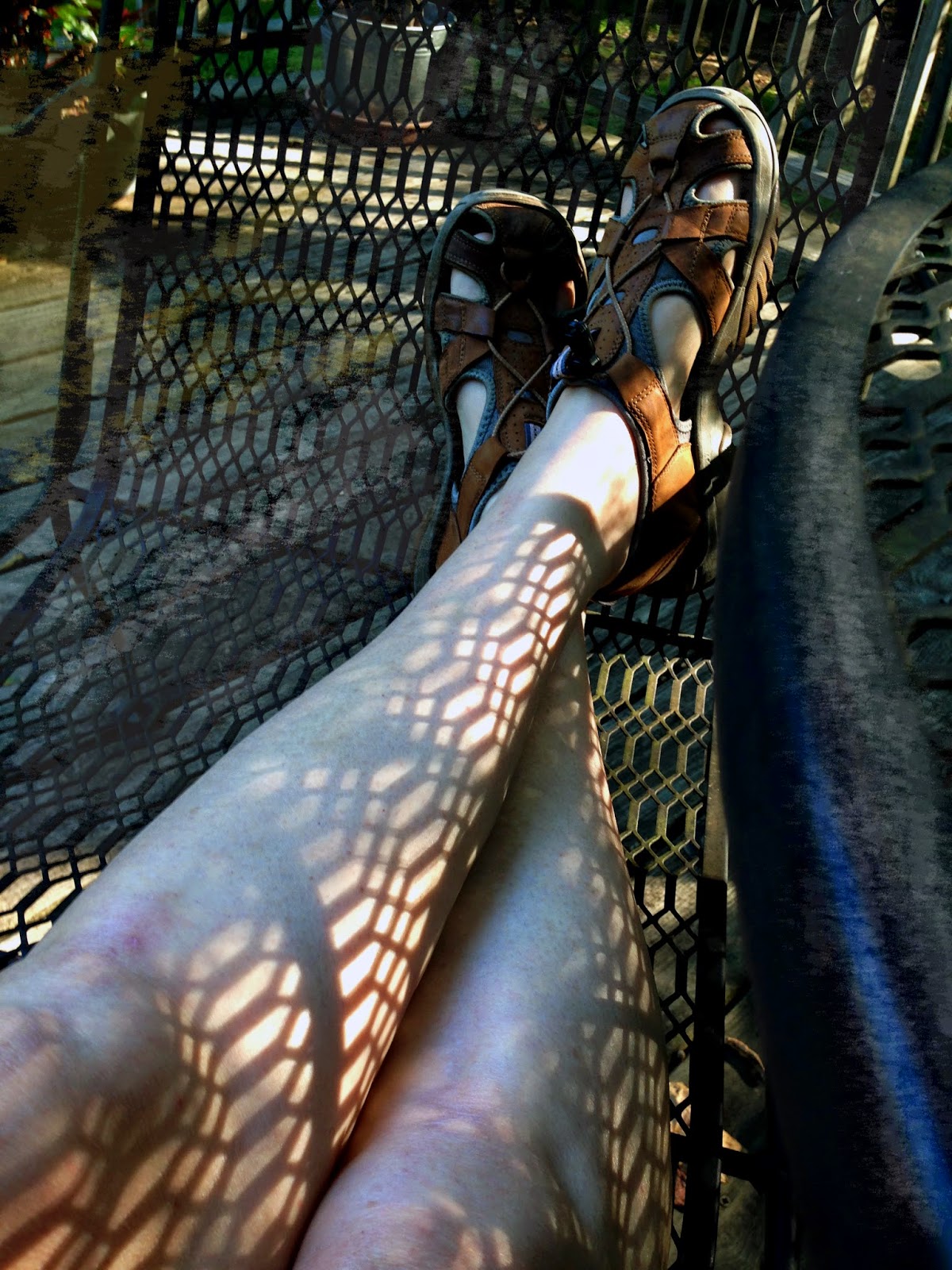 The other morning, as I was sitting on my back deck, I was suddenly struck by the pattern of shadows on my leg.  Just like that, I heard the first line of the poem below.  So, following once more in my tradition of boldly sharing my “bad poetry,” here we go.  I also hope it helps span the gap between relating personal experience to descriptions found in text books.

Me in my leopard leotard of wholeness
The weight of light and shadow on bare skin
reveals the super supple:
Silence gulping, “Brahman eating”
as I sip my morning coffee.
How to move without tearing these finest of silk stockings?
Oh, that I might rip a hole in wholeness!
A hole in wholeness -
Impossible, I know, and yet the tear is felt in every cell
and the very Silence.

Paradox is simply That: here, there and everywhere.
Which is different from “not knowing” or even being “lost.”
I remain the Queen of Contradictions and Conundrums.
Don’t look to me for answers
but good inquiry can be quite useful
until it’s not

not when god gives morning coffee,
cicadas humming their Samaveda
thru the perfect summer air
as my Retirement unfolds
and leopard leotards appear
out of Absolutely Nowhere.

It took a big effort to haul myself out of the silence of the leotards and pick up pen and pad.  That effort in itself shattered the direct perception.  But, it was so paradoxical the mind couldn’t let the issue drop.  I recalled Harri Aalto recently emphasizing that one can indeed see the Absolute – a seeming impossibility and contradiction.   I also immediately recognized these leotards as a version of Wang Liping’s practice with his reflections and shadows.  I couldn’t recollect exactly how the story goes, so I looked it up:

One day the Wayfarer of Pure Serenity took Wang Liping to a small reservoir, where he had prepared a large plank.  The Wayfarer had Liping sit cross-legged on the plank, then eased it out into the water, where it gradually came to a stop in the middle of the reservoir.  Liping sat on the plank in a state of silence… [When] the Wayfarer was sure that Liping had reached the right state, he disturbed the surface of the water with his hand, sending a wave of ripples toward the center of the reservoir.  When the ripples approached the plank, Wang Liping’s reflection in the water was shattered; he himself just felt a shudder in his heart…  When the ripples had passed, the surface of the water again became smooth as ever, and Liping’s body and mind returned to their former quietude…

The young apprentice told his mentor all about the sensation he’d had on the water, finding it quite beyond his understanding.  … [Through cultivation] the yang celestial soul and the yin earthly soul in his body had both been strengthened and sensitized.  From the ordinary point of view, shadows and reflections are unreal, things have form but not substance… From the Taoist point of view, however, these “unreal shadows and reflections with form but no substance” also have ethereal force, which can be felt by the body on contact…  This is why Liping’s body and mind stirred when his reflection was disturbed in the water.  When one gets to the “middle three realms,” shadows and reflections are no longer insubstantial forms; now they have form, they also have substance.  This is the principle underlying the practice of curing illness by working on people’s shadows, as Wang Liping later learned from his mentor.
Opening the Dragon Gate:  The Making of a Taoist Wizard, translated by Thomas Cleary

Interestingly, once you compare these experiences, you realize that both Wang Liping and I found it “quite beyond” our understanding.  This is confusing and new territory of what’s normal. It’s not what the mind is used to.  There are new rules and possibilities.  Or, to site Nisargadatta:
A good measure of spiritual maturity is the degree to which one can appreciate paradox and ambiguity.

Settling into this maturity comfortably requires both experience and intellectual understanding. … to wit, the effort at bad poetry as I try to get the words precise.  I hope it helps.
Posted by Pat Bralley at 12:32 PM