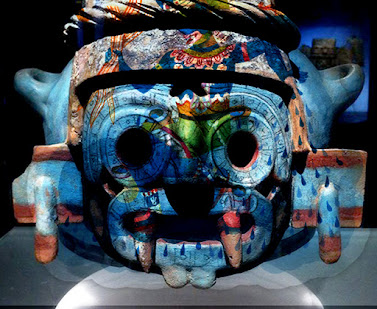 When he remembered an urgent errand.

Setting the manuscript down he drove into town.

Black clouds blew in without warning

He feared for the fate of the scripture

Rain is a Living Presence.

The storm now upon him

He prayer to the rain

Asking they be spared from destruction.

Arriving home after the cloudburst

Except armchair and scripture

He said to himself

Maybe it hears me

I’m going to speak to the Rain.

On the summit of a mountain in Mexico

He wondered, What gods were honored here?

He was told Quetzalcoatl and Tlaloc

Names which meant nothing to him

So be climbed the mountain, scaled the walls

And lay down on the ceremonial platform

Did he have the right to be there?

Was he being disrespectful?

Was this the place where priests with obsidian knives

He closed his eyes and hoped for the best.

Jaguar appears circling round the pyramid

His tail held straight up

So, you want to meet Tlaloc, eh?

Get on my back.

Jaguar leaps bounding into the air

They find themselves in another more colorful world

Under a different sky

The cat tears through this too

They enter a third world

The cat keeps on running through sky after sky.

In the thirteenth world Jaguar comes to a stop.

Below can be seen the worlds they passed through

Turning around, they see a young man

With long blond hair, blue eyes and a halo

From the center of each spouts a stream of blue water

Flowing down through the worlds below

Eventually forming the waters of Earth

Where fish swim and plants flourish.

Hello, I am Tlaloc.

Then how come you have blue eyes and brown hair?

You see me as a gringo because you are a gringo.

The people who built the pyramid saw me differently

But everyone knows me

I am the Rain God, Tlaloc.

What do you know about rain, about water?

Water is the element that supports movement and stillness alike.

Our joints move in water

Our food is digested

The surging of water moves our souls, our willpower, our ambition.

When the water in us comes to rest

We plunge below surface appearance

There are eternal moments between breaths

Giving a lecture to a god -

How am I doing?

That was very good!

You should be telling people these things

Look at the way man squanders the water

For most water is just a commodity

Something that comes out of a faucet

And Rain is a nuisance.

They treat me as if I had no feelings.

Naturally, I treat them the same way

They need to know.

A found story by P. Bralley, from Plant Spirit Medicine by Eliot Cowan